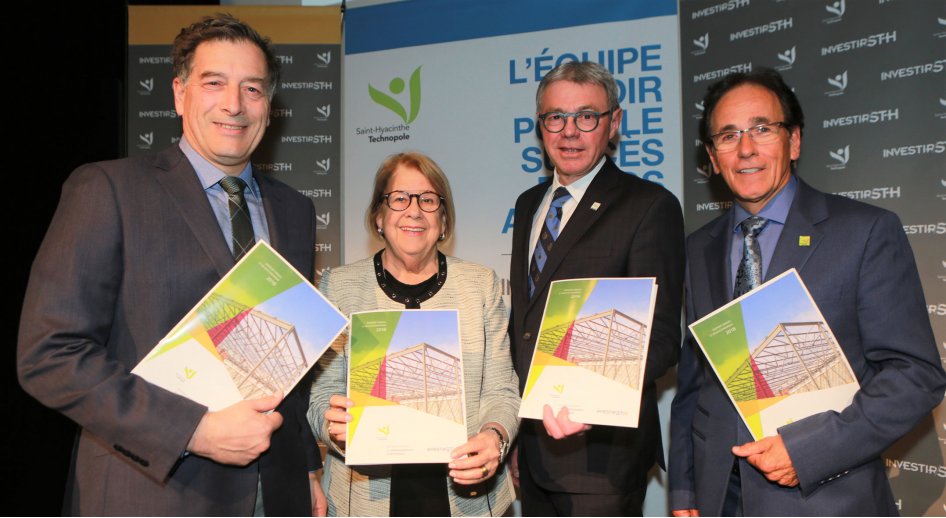 Saint-Hyacinthe Technopole is turning the page on another excellent year in economic development. In 2018, an unprecedented number of commercial and industrial businesses announced that they would be setting up or expanding in the area. This is one of the highlights of the annual economic report the organization presented today to a group of one hundred or so of the region’s economic and political representatives.

Saint-Hyacinthe Technopole’s general manager, André Barnabé, said: “The investments made by the Maskoutan business community in Saint-Hyacinthe Technopole’s sectors—tourism, commerce and industry—approach the considerable sum of $200 million. This points to stable growth supported by favourable national economic conditions, as well as a local setting that stimulates entrepreneurs’ confidence.”

The commercial sector clearly enjoyed the most visible growth in 2018. For a third consecutive year, the number of new buildings erected and new places of business opened has reached impressive levels. It should be noted that the commercial sector is still being stimulated by the strong comeback of convention activities in the area. More than a third of retailers said they benefited from the opening of the Saint-Hyacinthe Convention Centre.

A total of 29 new stores opened in Saint-Hyacinthe in 2018. This had a considerable impact on the investment value in this sector, which reached $26.4 million, the third best performance in the last decade. About 40% of that amount went toward the construction of new commercial buildings, the result of significant changes to the road network in the last year.

The balance between this addition of new spaces and the appearance of new businesses in our database pushed the commercial occupancy rate to a little over 91%. This is excellent news, especially since the most marked increase in this rate was in the downtown and surrounding areas.

The data collected in the industrial sector revealed that Saint-Hyacinthe is recovering well from the slight slowdown in 2015 and 2016, when the investment level was below the symbolic bar of $150 million, falling short of the average for the last decade. With total investments of a little over $159 million, this bar has been shattered for a second consecutive year. The buoyant industrial activity is only being held back by the lack of large industrial surfaces to develop and a labour shortage.

As for jobs, while the number of new industrial jobs created was much lower than what we are used to, the net change in employment was positive, reaching 66. The start-up of new businesses and expansion of existing businesses on our territory also positively compensated for the number of jobs affected by rationalizations. On that subject, a large portion of the job losses registered as rationalizations are rather positions that still need to be filled in the companies we visited.

Saint-Hyacinthe’s manufacturing workforce has risen 17% since 2010, an excellent performance that helped add more than 1,400 workers to our industrial parks.

Saint-Hyacinthe’s tourism industry was not left out of 2018’s good news. The Saint-Hyacinthe Convention Centre’s first full year in operation and the synergy developed with the Espace Saint-Hyacinthe facilities helped us take back the envied title of “top business tourism destination outside of Quebec’s urban centres.” The 2018 tourism report reflects this new situation, with the Maskoutan region’s tourism sector generating near-record direct economic benefits totalling a little over $46 million. Nearly $5 million of this amount were generated by conventions and major business events.

Saint-Hyacinthe Technopole and its business tourism partners are already surpassing the strategic objectives set for 2019 in terms of the number of events held. With 87 conventions and events totalling more than 40 bed-nights, it is a marked increase, six times higher than last year.

Pleasure tourism is maintaining steady growth. The large majority of events and attractions saw non-negligible rises in patronage. Supported by the addition of new events, mainly in the fall, the number of people visiting the fairs, festivals and exhibitions open to the public totalled 410,000. The Maskoutan region welcomed some 1,107,000 visitors from more than 40 km away in 2018.

“Several other positive signs have us believing that this economic fervour is sustainable. First, Saint-Hyacinthe Technopole’s active business support and setup projects have reached significant levels. We have witnessed the emergence of a new generation of businesspeople eager to start their entrepreneurial journey. We have also noticed that industrial businesses are determined to overcome the growth challenge with strategies focusing on innovation and the knowledge economy,” concluded Saint-Hyacinthe Technopole’s president, Bernard Forget.

The full report (in french only) produced by Saint-Hyacinthe Technopole is available on its website, at www.st-hyacinthetechnopole.com.