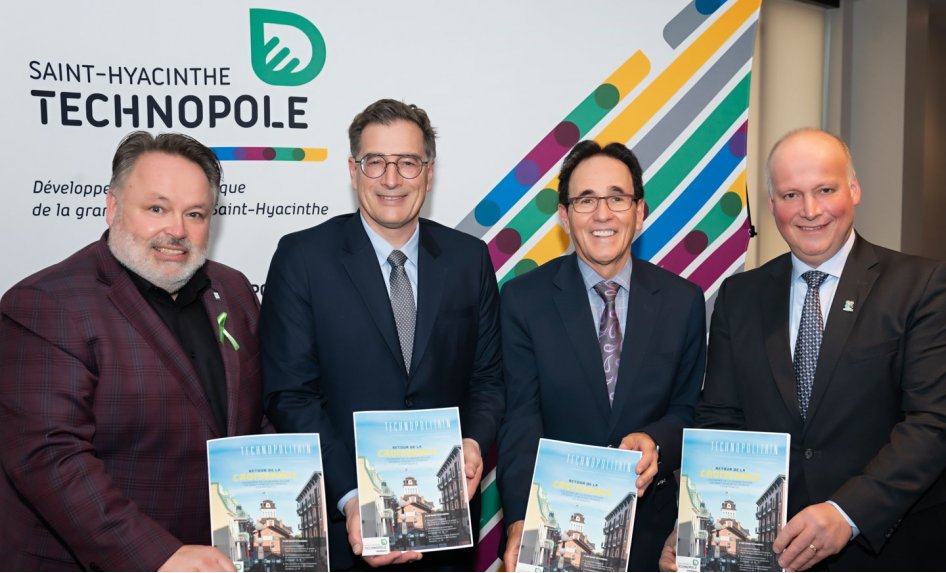 After a year of stability, the greater Saint-Hyacinthe region’s economy resumed its growth, surpassing expectations in 2021. So reported Saint-Hyacinthe Technopole at its annual general meeting, where it presented its activities and the economic situation during the previous year in the presence of a hundred or so of the region’s socioeconomic representatives.

Maskoutan businesses, whether industrial, commercial, tourism or agricultural, managed to do well. Several carried out expansion projects despite the global economic context marked by considerable new challenges, such as international supply chains disruptions and the public health situation, which continued to generate a certain level of uncertainty, mainly for shopkeepers. As a result, investments in the Les Maskoutains regional county municipality (RCM) reached a very significant level and the total employment level stabilized.

Record investments in manufacturing
No less than 179 local businesses in the industrial sector opened or expanded during the last year. This made total manufacturing investments climb to nearly $269.5 million, one of the highest levels in the region’s economic history.

There was also a considerable surge in job growth. With 795 new industrial jobs, this figure is far above the average for the past 10 years. However, job losses due to closures and downsizing and positions that remain vacant must be subtracted from this number. The manufacturing sector therefore had a net contraction of 69 jobs. By the end of the year, the 308 industries in the region counted a total of 13,349 jobs.

The agri-food industry demonstrates its importance for the local economy
With a share accounting for approximately two-thirds of investments and manufacturing jobs created, the agri-food sector dominated the 2021 economic report. Saint-Hyacinthe’s City of Agri-Food and Veterinary Biotechnology, a technology park dedicated to agri-food innovation, alone reported private investments of around $47 million. The backbone of the industry, the agricultural production sector reported investments of nearly $29 million in the Les Maskoutains RCM.

The commercial sector gained strength
The area’s commercial sector is once again beating forecasts in the second economic report in a pandemic context. For the City of Saint-Hyacinthe’s territory alone, the total amount invested in capital for this sector is $33.5 million. This is 118% more than the previous year and the best performance since the record set in 2017.

The net change in the number of businesses operating in the territory remains largely positive. Despite the 14 definitive closures reported in 2021, 50 new places of business opened, for a surface area of nearly 93,000 square feet.

The year ended with a total of 1,482 stores in Saint-Hyacinthe. The total number of commercial places of business is estimated to be approximately 550 in the RCM’s other municipalities, bringing the total for the entire Maskoutan area to slightly more than 2,000.

Tourism indicators are starting to pick up
The tourism sector is showing encouraging signs of recovery. It started with the summer tourism season, when most attractions were allowed to open and events could be held in person again. The total number of people who visited the region for its major attractions and events increased by around 135% compared to last year, totalling a little over 112,000 people.

The region’s tourism performance was also supported by the resumption of business tourism activities, which had practically come to a halt for more than a year. In 2021, 44 conventions and business events of more than 40 person-nights were held in the Maskoutan territory, mainly due to certain indoor meeting and event space occupancy limits being lifted in June. That is nearly double what had been achieved the previous year before the start of the health restrictions. These events generated nearly 6,000 overnight stays in our hotels and $2 million in direct economic benefits from visitor spending.

225 new immigrant families welcomed
Since last May, Saint-Hyacinthe Technopole has been counting on a new immigration development service whose aim is to promote population growth in the region by attracting new citizens from around the world. During 2021, its efforts enabled 365 people to get settled in the regional county municipality.

Saint-Hyacinthe Technopole’s actions in this area were also a great support for the Maskoutan business community, which must find ways to attract new talent. Several labour recruitment operations were carried out during the year. These efforts will have made it possible to identify and recommend nearly 400 candidates to businesses seeking employees with a very specific profile.

André Barnabé, Saint-Hyacinthe Technopole’s general manager said, “The scope of the programs and services our organization offers made it possible for our advisors to directly respond to 432 businesses throughout the territory. Much of the support the team members provided involved emergency assistance, which mobilized resources to help nearly one hundred businesses or industries that were more specifically affected by the pandemic. In short, there has been no shortage of work. Although small, our team of professionals and volunteer board members has once again demonstrated its expertise and willingness to take concrete actions for the development of our area and its businesses, throughout the Maskoutan territory.”