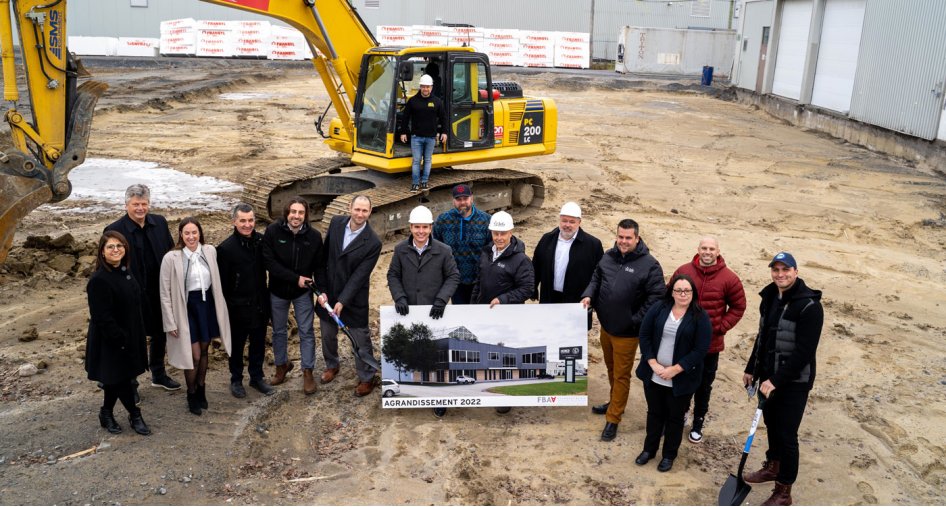 Just three years after its inauguration, Station Agro-Biotech in Saint-Hyacinthe is announcing a major investment project to expand its facilities.

The project, which will be carried out in 2022, is needed due to the rapid growth of the three businesses overseen by Agro-Biotech Station. The 12-some million dollars invested will be used to add another 30,000 square feet to this private complex located in the Olivier-Chalifoux industrial park. Most of the additional space will hold new production equipment that the occupying businesses need for their activities. The project’s aim is to optimize the production line and to offer optimal working conditions to the plant’s operators and employees.

Jonathan Robin, founding president of Station Agro-Biotech said, “The goal is, of course, to increase our productivity and keep up with the growth of our businesses, but above all, we wanted to set an example as an employer that cares about its team’s well-being by offering state-of-the-art equipment and a safe, pleasant and enjoyable work environment.”

In addition to an add-on that will triple the plant’s current surface area, a second floor will be added to the existing building, to provide the administrative employees with spacious workspaces. These spaces have been designed with the new telework reality in mind.

An agri-food business incubator, Station Agro-Biotech Station’s team oversees three local businesses, all under one roof: the NOROI distillery, the Le Bilboquet microbrewery and the Atypique beverage company, which joined less than a year ago. It is the combined growth of these three businesses and the need to increase their production capacity that made this expansion project necessary.

According to André Barnabé, Saint-Hyacinthe Technopole’s general manager, “Saint-Hyacinthe already has a well-established reputation for developing agri-food products and technologies. Station Agro-Biotech is unique in our business ecosystem in this area of activity, in the sense that it is an entirely private collaborative production complex. Over the last three years, it has contributed to the emergency of the beverage industry, a sector which our region now stands out. We are therefore pleased to support this already successful project, which is making an incredible contribution to the Technopole’s reputation as a major centre for food innovation.”

It goes without saying that a project of this size would not be possible without financial assistance and support from partners like the BDC, Desjardins, Investissement Québec, Farm Credit Canada, Saint-Hyacinthe Technopole and Jefo Construction. This achievement highlights the importance of using Quebec collaborators to bring about successful local projects.

Founded in 2019, the NOROI distillery offers consumers a selection of refined and innovative spirits. Its unique cold distillation process extracts and concentrates aromas and flavours that would normally be lost or altered with the traditional method. That is the secret behind the quality and difference of NOROI’s products. NOROI spirits can be purchased at the SAQ and directly at the distillery. distillerienoroi.com

Founded in 1990, Le Bilboquet is one of Quebec’s first microbreweries. From the moment it opened, it has never stopped innovating, to offer a wide variety of exceptional beers that remain accessible to everyone. Le Bilboquet specializes in the production of craft beers, including unfiltered and barrel-aged beers. Made from malted barley, wheat, top-quality hops and selected yeast, our beers of all styles are constantly renewed to remain up to date with consumers’ tastes. Le Bilboquet’s products are distributed via a network of more than 2,000 retailers across Quebec.  lebilboquet.qc.ca

Atypique is the perfect mix of a great idea and a creative team. Born of a collaboration between Étienne Boulay and Station Agro-Biotech, Atypique aims to push the limits of the ready-to-drink industry, by offering everyone’s favourite cocktails, but in alcohol-free and low-sugar versions. Atypique’s products can be found at Sobeys. lesbreuvagesatypique.com