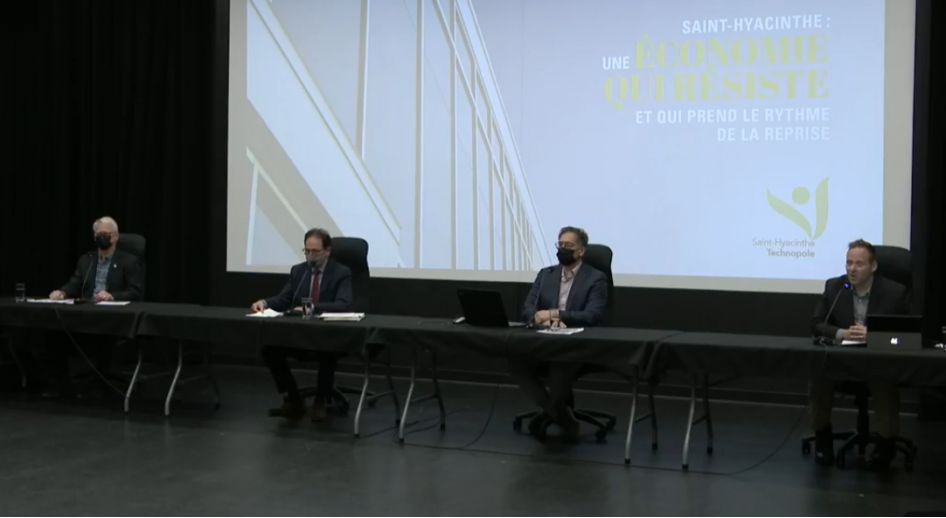 In spite of the pandemic, which caused one of the worst global economic slowdowns in history, the Maskoutan economy pulled through the crisis and was able to keep key growth indicators up in 2020. That is what the annual economic report for the Greater Saint-Hyacinthe region shows, as presented today by Saint-Hyacinthe Technopole and the MRC des Maskoutains.

“Saint-Hyacinthe’s economy was able to weather the storm,” said Saint-Hyacinthe Technopole president Bernard Forget. “Business investments, jobs and activities did not fall as sharply as anticipated and, in many respects, any ground that was lost at the height of the health crisis has since been regained. This is explained in part by the essential nature of many of our industrial activities (agri-food) and in part by the creativity and ingenuity of our entrepreneurs, who  adapted their operations to the circumstances.”

The industrial sector was undoubtedly the least hard-hit by the crisis. In spite of the pandemic, 109 industrial expansion projects went ahead on the City of Saint-Hyacinthe’s territory in 2020, including four start-up projects. The nearly 134 million dollars invested were injected into the local economy. Although this amount is slightly less than the average for the last ten years, it exceeded expectations.

What is more, the sector’s performance made it possible to recover nearly all of the manufacturing jobs that had been lost in 2020 due to the crisis. At the end of the fiscal year, 9,994 people were working in Saint-Hyacinthe’s factories, representing 99% of workers employed the previous year. There was a net decrease of 132 jobs, which is barely over 1%. The industrial projects carried out during the year will have created 389 new factory jobs, supporting this catch-up. It must be noted that the contraction of employment seen during the last year follows a significant jump in 2019, the largest net increase in manufacturing jobs in the last 20 years.

Saint-Hyacinthe’s commercial sector did surprisingly well in this situation. Just over 15.3 million dollars were invested during the course of the year, 7% more than in 2019.

Saint-Hyacinthe Technopole reported that 32 new business establishments opened on its territory in 2020 (five more than the previous year), occupying nearly 45,000 square feet of surface area. A total of 21 businesses permanently closed during this same period, some not directly pandemic-related. The good news is that the number of business openings slightly exceeded the number of closures, even amidst the instability and uncertainty. The occupancy rate of commercial spaces stood at 90.11% at the end of the year.

Practically on “pause” since the start of the health crisis, the tourism sector in the greater Saint-Hyacinthe region was struck a hard blow in 2020. For the pleasure tourism segment, the tourist season saw the cancellation of 26 of the 30 public events, celebrations and festivals usually held in the region. Fortunately, local tourism was popular in the summer and fall. This helped nearly half of the territory’s tourist sites maintain their patronage level.

The pandemic also heavily impacted business tourism. In the last year, the region hosted only 25 major conventions and business events, whereas it had re-established a rhythm of one hundred or so events per year since 2018, holding 123 in 2019. At least 102 events planned for 2020 were unable to be held, resulting in an 80% drop in business tourist spending, down to $1.5 million. Fortunately, nearly 70% of these events were able to be postponed rather than cancelled.

The average occupancy rate for Maskoutan hotel establishments was 24% in 2020, 32 percentage points less than in 2019, similar to Montérégie and Quebec as a whole.

$49 million in manufacturing investments in the MRC’s rural municipalities

Manufacturing companies in the MRC des Maskoutains’ 16 rural municipalities invested just over $49 million in 2020, around 28% less than the previous year. A large portion of the money was invested in the municipalities of Saint-Pie ($24.8M), Saint-Valérien-de-Milton ($6.5M), Saint-Dominique ($5.8M), Saint-Hugues ($5.7M) and Saint-Damase ($3.7M). A total of 44 new factory jobs were created, for a net reduction of 412 jobs, if subtracting the restructuring reported.

Therefore, the regional county municipality’s entire territory, including Saint-Hyacinthe, received $183 million in industrial investments in 2020. The region’s economy generated 433 new industrial jobs, but recorded a net decline of 544 jobs, equivalent to nearly 4% of all manufacturing jobs.