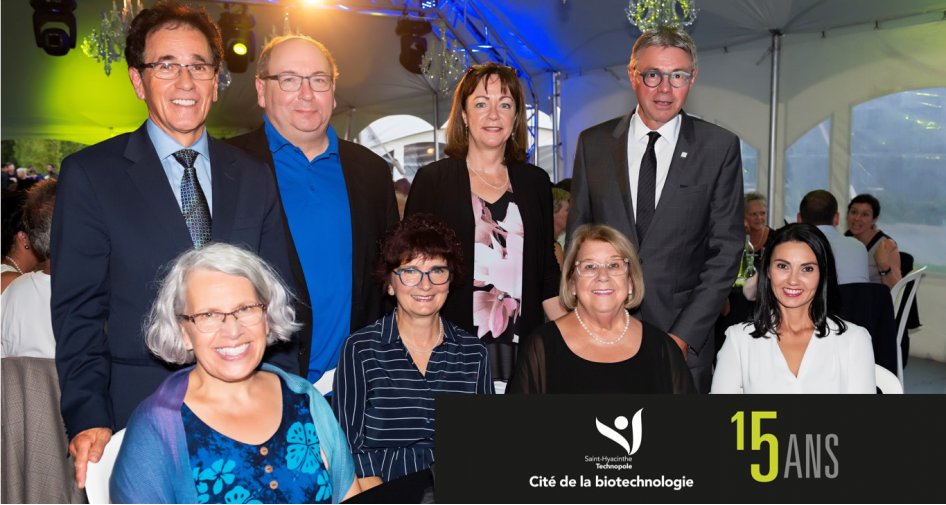 Saint-Hyacinthe’s City of Agri-Food, Veterinary and Agri-Environmental Biotechnology turned 15 this year! A celebratory evening was held, bringing together some 200 political and economic figures who were involved in the technological park’s foundation and its development over the years.

Despite being relatively young, the technological park, which specializes in the agri-food, veterinary and pharmaceutical sectors, has enjoyed a string of successes and built a reputation that extends far beyond the region. Today, nearly 3,000 professionals, including 200 world-renowned researchers, work in the City of Biotechnology each day. They are spread throughout thirty-some innovative private businesses as well as large number of research, educational and technology-transfer institutions.

“The City of Biotechnology is without a doubt one of the largest economic development projects in our region’s history. It is the result of many years of political and economic mobilization in Saint-Hyacinthe, which started over 40 years ago with the seeds of Saint-Hyacinthe’s economic reconversion to the agri-food industry, for which it is known today. The City of Biotechnology’s developmental successes are attracting international attention to our region,” said Bernard Forget, Saint-Hyacinthe Technopole’s president, during the anniversary celebration.

Over the years, the City of Biotechnology has won many national and international awards, making the greater Saint-Hyacinthe area, its businesses and its institutions known around the world. In 2011, the European Commission named the City one of the best development models for its welcome and support infrastructures and for the synergy developed between its stakeholders. That same year, the Association of University Research Parks picked the City as the “World’s Best Emerging Research Park” from among a dozen international finalists.

A history marked by community mobilization

It was in February of 1998 that the project to create an agri-food-focused technological park in Saint-Hyacinthe was first discussed. Saint-Hyacinthe’s member of the National Assembly of Quebec, Léandre Dion, launched the idea with the support of the city’s mayor, Claude Bernier, and the general manager of the CLD Les Maskoutains, Mario De Tilly. Inspired, the community quickly began laying the foundation for the project, which was already named the City of Biotechnology. A business plan was developed and much effort went into setting up the first infrastructures to attract new businesses.

In 2002, the City of Biotechnology was officially recognized by the Quebec government, which granted it significant tax incentives and set up a biotechnology development centre (CDB) to help young businesses in this sector flourish. The Ministère de l’Agriculture, des Pêcheries et de l’Alimentation also transferred the 23-hectare property that was the site of its former experimental farm to the City of Saint-Hyacinthe so it could start its property development.

The City of Biotechnology was officially founded on January 16, 2003. Since then, around 30 high-tech businesses have opted to develop their activities in the park. The City has also developed a considerable property portfolio, which it uses to welcome emerging businesses specializing in the agri-food, veterinary and pharmaceutical sectors. Seven buildings offer over 200,000 square feet of production and research space and are used by a dozen innovative companies. The complex buzzes with scientific and technological activity, with over 300 highly qualified employees working there each day.

The City of Biotechnology has had a major positive impact on the local and regional economy. Over the last 15 years, the technological park’s development has attracted over $350 million in private investments in Saint-Hyacinthe, used to set up new businesses and aid in their expansion. As for the public sector, over $500 million was invested in the City of Biotechnology to expand, specialize and improve the research and educational infrastructures in its higher education and research institutions.

All-told, in its 15 years of existence, the City of Biotechnology has brought about nearly $1 billion in investments, without counting the considerable tax benefits for the city of Saint-Hyacinthe and the thousands of jobs created in cutting-edge industries.

It is worth noting that Saint-Hyacinthe’s City of Agri-Food, Veterinary and Agri-Environmental Biotechnology is one of the first technological parks in North America to be devoted exclusively to the biofood sector. It was developed around two major higher education and research institutions: Université de Montréal’s faculty of veterinary medicine and Agriculture and Agri-Food Canada’s federal food research and development centre.