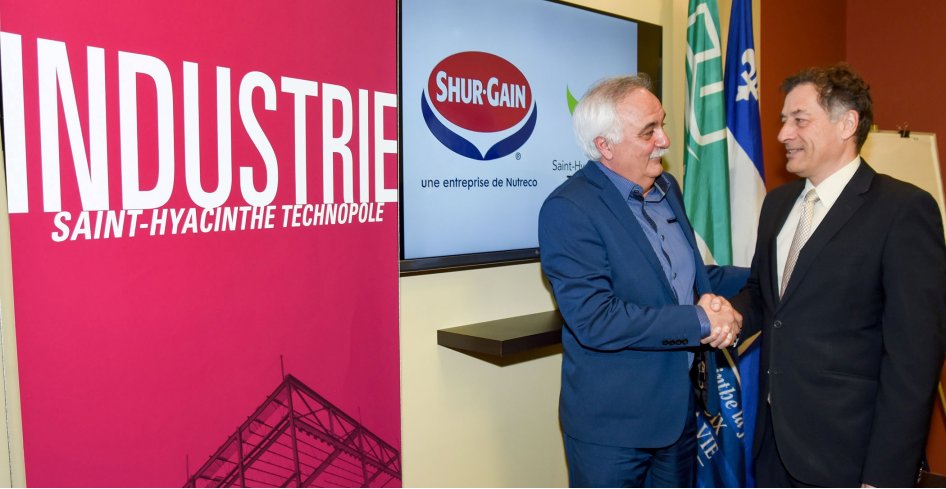 Shur-Gain management announced a considerable consolidation of its activities in its Saint-Hyacinthe office, which will become the animal feed company’s regional office for Eastern Canada.

The company is investing nearly a quarter of a million dollars to expand its offices on Martineau Street. This will allow it to add another 20 or more employees, several of whom are being relocated from the facilities in Brossard, which closed in late February. The building will also house the offices of Nutreco Canada’s president and vice-president of finance. Most of the work has been carried out in the last several weeks. Once the project is completed, 66 employees will be working in the Saint-Hyacinthe facilities.

“As Quebec’s agricultural heart, Saint-Hyacinthe was an obvious choice for the consolidation of our operations for Eastern Canada. We also received considerable support for our projects from the municipal authorities and Saint-Hyacinthe Technopole,” explained Picard.

Additional investment in Saint-Hyacinthe plant
In addition to consolidating its administrative unit, Shur-Gain will have invested over $2 M in 2016–2017 to improve its production facilities on Duplessis Street in the Théo-Phénix industrial park.

“This is excellent news for Saint-Hyacinthe. To have a major company like Shur-Gain choose our region for one of its national headquarters is a sign of our strong position in Canada’s agricultural and agri-food industry. Having this company’s main decision-making centre on our territory will likely open doors to other major investments in this sector,” said Mr. Barnabé.

About Shur-Gain
Shur-Gain is a recognized leader in the animal nutrition industry. Trusted by agricultural producers for 80 years, it offers a complete line of nutritional solutions for the main livestock species, from coast to coast in Canada and in New England. The eastern region, served by a team of over 520 employees, is supported by a vast network of service centres in Quebec and Ontario.

Shur-Gain is a Nutreco company, world leader in animal nutrition and fish feed. The advanced nutritional solutions Nutreco provides help feed millions of people around the world thanks to its presence in over 90 countries.